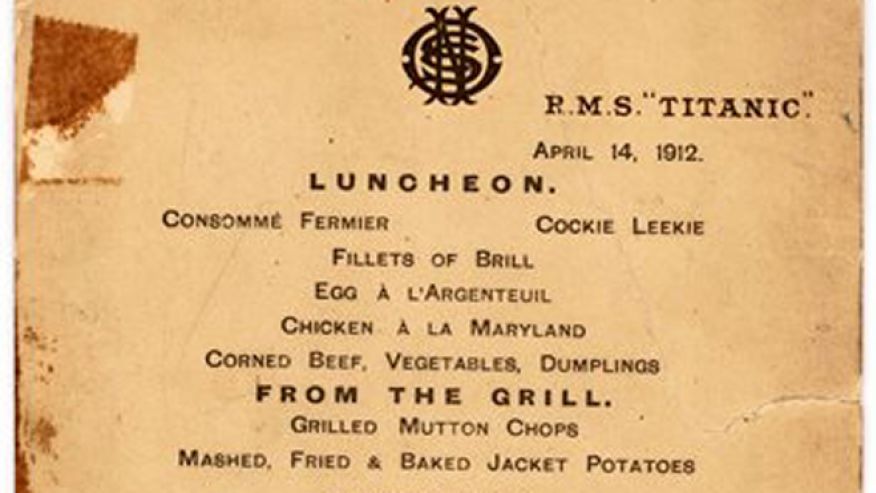 NEW YORK – The Titanic’s last lunch menu, saved by a first-class passenger who climbed aboard a lifeboat whose crew was said to have been bribed to row away instead of rescue more people, sold at auction for $88,000 on Wednesday.

Abraham Lincoln Salomon was among a handful of first-class passengers who boarded the lifeboat, dubbed the Money Boat or Millionaire’s Boat by the press because of unfounded rumors one of them bribed seven crew members to quickly row the boat away from the sinking ocean liner.

The menu, which lists corned beef, dumplings and other savory items, is signed on the back in pencil by another first-class passenger, Isaac Gerald Frauenthal, who escaped on another lifeboat. It’s believed the two men lunched together that fateful day in 1912.

Salomon also took away a printed ticket from the Titanic’s opulent Turkish baths, which recorded a person’s weight when seated in a specially designed upholstered lounge chair. The ticket bears the names of three of the five other first-class passengers with him on Lifeboat 1. One of four weighing chair tickets known to exist, it sold for $11,000.

A letter written by Mabel Francatelli to Salomon on New York’s Plaza Hotel stationery six months after the disaster fetched $7,500. Francatelli had climbed into Lifeboat 1 with her employer, aristocratic fashion designer Lucy Duff-Gordon and her Scottish husband, Lord Cosmo Duff-Gordon, who was rumored to have bribed the crew to row them to safety in the boat, which had a capacity of 40.

The Duff-Gordons, the only passengers to testify about the disaster, were cleared by the British Wreck Commissioner’s inquiry, which determined that they did not deter the crew from attempting to rescue other people but that others might have been saved if the boat had turned around.

“We do hope you have now quite recovered from the terrible experience,” Francatelli wrote to Salomon. “I am afraid our nerves are still bad, as we had such trouble & anxiety added to our already awful experience by the very unjust inquiry when we arrived in London.”

Lion Heart Autographs said the seller was the son of a man who was given the items by a descendent of one of the survivors of the lifeboat. It did not identify the buyers.